If you live anywhere near Philadelphia, there is a frozen summer staple that must be enjoyed at least once to make the season complete: water ice. Water ice stands are truly ubiquitous in every neighborhood across the city, extending out into the suburbs and towns in the greater metro area. Thanks to the Mid-Atlantic accent, you may hear this sugary delight pronounced “wooder ice,” and the food is as tied to Philly food culture as pretzels, cheesesteaks and roast pork sandwiches.

there’s nothing like summer in the city 🍍🍓😍 . . 🍦gelati: pineapple water ice + strawberry ice cream 🍓 @johnswaterice 📍Bella Vista, Philadelphia . . John’s Water Ice is THE philly water ice spot. It opened in 1945 & their recipe consists of fruit, water & sugar. I ordered a gelati, which is the combination of water ice & ice cream. The pineapple was so good, but even better when mixed with the fresh strawberry ice cream. John’s is cash only and they have specialty flavors all the time. One of my top recommendations for Philly! 👑👑👑👑👑/5 for @johnswaterice . . . #philadelphia #queenoficecream #socialdistancing #theq #discoverunder5k #foodblogger #philly #johnswaterice #phl #phleats #swagfoodphilly #phillybite #visitphilly #whyilovephilly #bellavista #bellavistaphilly #phlfoodstagram #jerseyshoreicecream #waterice #italianice

The Italian-American influence in Philadelphia is strong because of a significant influx of Italian immigrants in the late 1800s and throughout the first half of the 20th century. In Philly, many of these families took root in South Philly, especially in the area that’s known as the Italian Market (which is now much more culturally diverse, with dozens of businesses owned and operated by Southeast Asian and Latinx communities). Though Italy’s foodways are by no means homogenous, there are some specific foods that seemed to resonate in American culture and took root as Italian-American classics.

Granita is a traditional Sicilian dessert made from water, sugar, and flavorings, such as espresso or fruit juice. As it freezes, the liquid is agitated and scraped so that fine crystals form and the liquid is not able to freeze into a solid block. As a finished product, it’s a refreshing icy dessert, more coarse than sorbet. On American soil, granita became known as Italian Ice, and specifically in Philadelphia, as water ice.

Why the local regional dialect latched onto “water ice,” while “Italian ice” prevails across the rest of the East Coast, is unclear. There are Reddit threads and Chowhound message boards dedicated to the discussion of this topic, without much input from food historians as to why, either. It’s just a vernacular mystery!

One thing is for sure, though: When spring rolls around, water ice stands and shops see their devotees turn out in droves. The Philadelphia area is home to some bigger chains based around the product, such as Rita’s, which boasts over 500 locations in the US. Rita’s was founded in 1984 by Bob Tumolo, a former Philadelphia firefighter, who began selling water ice from a porch window in Bensalem, Pennsylvania. He named it after his wife, Rita. Tumolo designed a special formula with his mother, Elizabeth, which includes real fruit and is made fresh daily. 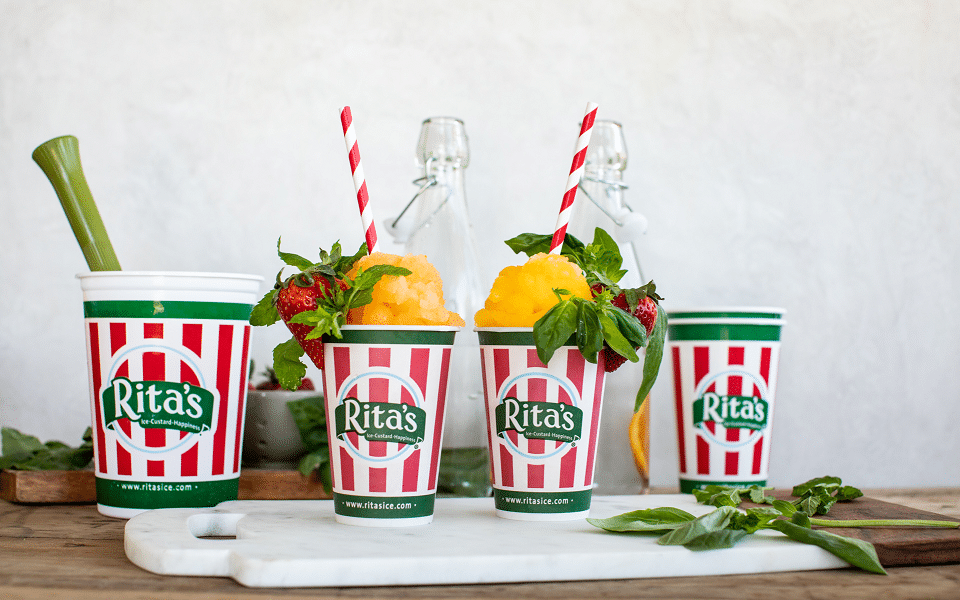 Philadelphia Water Ice Factory is another bigger brand, which began in 1988 in Philly’s Port Richmond neighborhood. After experiencing much growth, it is now primarily a wholesale company, providing many flavors of water ice, as well as freezer equipment and pushcarts to other businesses. There are countless mom-and-pop style water ice shops across the city, as well. Truly, no neighborhood is without one.

Many of these spots take pride in making their own water ice from fresh fruit, with creative, fresh flavors that innovate beyond classic lemon and cherry. And while the Italian-American influence is strong, there are folks from many different backgrounds running water ice businesses! A few local spots to check out include:

What’s your take on water ice? Is it a childhood favorite? If you’re not a PA native, had you even heard of it before moving here? Got a favorite flavor, or gelati combo? Let us know in the comments here or on the PA Eats Facebook page!